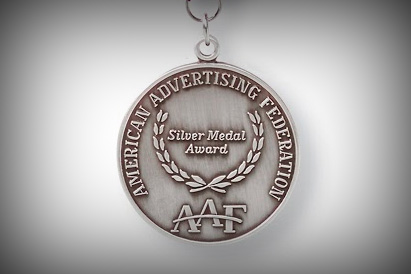 The AAF SWVA is excited to announce the first ever Silver Medal Award Program in Southwest Virginia. This prestigious award was established by the National American Advertising Federal in 1959 to recognize the men and women who have made outstanding contributions to advertising and who have been active in furthering the industry’s standards, creative excellence and responsibility in areas of social concern.

For many local clubs, like the SWVA club, awarding the AAF Silver Medal will be the highlight of the year. It enhances the image of advertising by recognizing a locally well-known person for their advertising and community involvement

You can think of it as the Lifetime Achievement award for the advertising professionals in our region, honoring the career and commitment of one of the icons of our region.  The award will be presented during the 2015 American Advertising Awards, set for Saturday February 28th, 2015 at the Bristol Train Station.

The Silver Medal Award is the highest honor that a local club can bestow, and will certainly be a career highlight for the winner.  It is not a popularity contest or a political thing, and the selection of the recipient is not taken lightly. You do not have to be a member of AAF SWVA to nominate someone or be a nominee for the award.

You probably already have someone in mind to nominate! Nominees could be an influential educator or mentor, a leader in your company, or anyone who meets the criteria below and has made a significant impact to the advertising profession during their career. If you could use a few brownie points, this might just do the trick!

Silver Medal recipients are selected by a panel of judges based on the following criteria:

Nominations must be accompanied by a list of career highlights and samples of work by January 9, 2015 at 5:00 p.m.